skip to main | skip to sidebar

(In an on-going series.)

Grid-based algorithms for filling up space with boxes: (this is all HTML+CSS+Javascript) 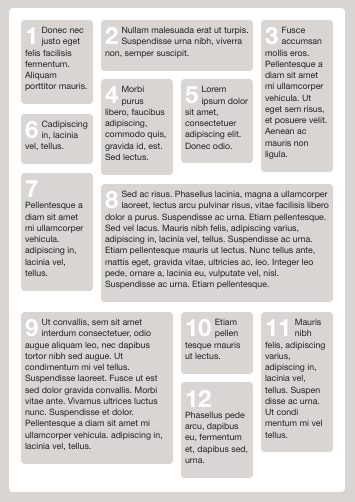 The best LaTeX algorithms for space-filling revolve around column-balancing running text with floating boxes within. For arranging boxes as here, I’m not aware of any high-level tools, although ConTeXt may have some that I’m unaware of.

The alleged number of pixels in the display of the next-generation iPhone has been discussed and questioned in recent times.

If you would like a concrete reason why it would be a good thing for the rumoured 2010 release iPhone to have a screen resolution in excess of 300 dots per inch, consider a screenshot taken on a current iPhone display, which has a resolution of around 160 pixels per inch: 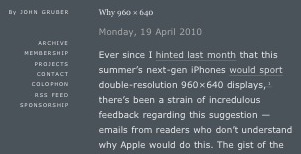 The image has been taken in portrait orientation, cropped vertically, and zoomed to emphasise the low resolution. At its natural size, this text would not be physically too small to read; in my estimation it’s equivalent to type at around 6pt to 8pt. This is small for most printing standards, but not unreasonably so.

However, the low number of pixels per character in the image above inhibits the text from actually being comfortable to read due mainly to the anti-aliasing artifacts. With double the resolution, this text would look fantastic.